Does Netflix Makes Money? Sure, But Not As Much As You'd Expect. 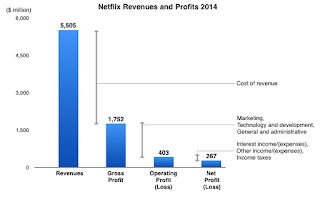 On the digital planet, we're all used to see big numbers and big figures. We rarely see the real numbers behind the success stories. It's all kept hidden.

I just stumbled across this Netflix report. We all know Netflix has millions of paid subscribers, and they make billions in revenues. But how about the operation expenses? Right now, Netflix is not even convering their share of bandwidth usage across content distribution servers, but let's take a look at their current (2014) numbers.


Of the $5.5 billion of Netflix total revenues in 2014, $3.8 billion represent the cost of revenue. Say, the operation expenses.

This results in $1.7 billion of gross profit and a gross margin of 31.8%. Netflix spent $607 million, $472 million, and $270 million on marketing, technology and development, and general and administrative expenses respectively.

This results in $403 million of operating profit and an operating margin of 7.3%. After interest and other expenses and taxes, Netflix had a net profit of $267 million and a net margin of 4.8%.

Folks, I'm updating software on my broadcast server!
Black Flag TV and all sister channels are offline for a moment. Hang on there, channels will be back later today!
Thanks for your understanding.
Sv
Posted by Sv Bell at 7:29 AM No comments: 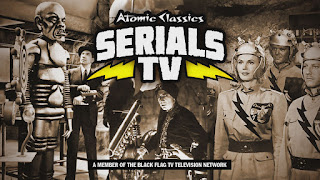 Black Flag TV's new sister channel has arrived! SerialsTV focus on these exciting 40s and 50s serials that were presented in theaters, before every feature presentations.

Space adventures, secret agents, zombies, alien invasions, it's all there. Atomic adventures from simpler times, fasten your rocket backpack, and jump in the action!

Just like all the other channels, Serials TV is available on Roku for those who prefer to watch on TV instead of the free web stream. All series' episodes are shown one after the other, non stop. Each series air for around a week before being replaced by a new show.

Running a TV portal, blog or website?
Add Serials TV to it with this embed code:

Apple wants to jump in the ever growing business of streaming media. But why produce original content? Because AppleTV. The talk is that Apple is about to launch a new version of their streaming box, and what better way to sell devices than to create original content exclusively for it.

Noticed how Apple (among other hardware manufacturers) is claiming applications are the future, and billions of dollars are to be made with developing apps? We hear it very often, right?

But then, why isn't Apple developing more apps themselves? In fact, Apple has abandoned a whole lot of their software lineup these past couple of years. Because they know money doesn't come from apps. Developing software is a continuous, never ending investment and applications have a very short lifespan.

Money comes from the devices a manufacturer sell and that's what Apple will focus on.

Real money is in the real world, period. All the other sensational claims are e-marketers bullshit!

Some online video numbers from the folks at Statista (remember that "revenues" are NOT "profits"). 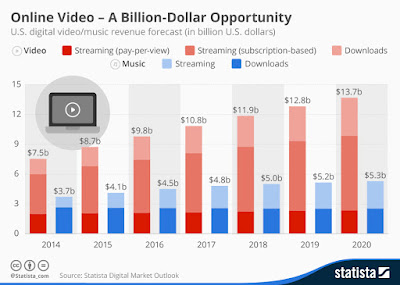